(MPI)  PredPol is now being used in a third of the LA Police Department’s 21 geographic policing divisions, and officers on patrol are equipped with maps sprinkled with a dozen or more red boxes indicating high probabilities of criminal activity. For now, the LAPD is focusing on burglary, vehicle break-ins and car theft – three types of crime that last year made up more than half of the roughly 104,000 crimes recorded in LA. Dozens of other cities across the US and beyond are using the PredPol software to predict a handful of other crimes, including gang activity, drug crimes and shootings. Here’s a list of some of the police departments using crime predictive software: Atlanta, Seattle, Chicago, Texas and New York.The prediction algorithm is constantly reacting to crime reports in these cities, and a red box predicting crime can move at any moment. But although officers in the divisions using PredPol are required to spend a certain amount of time in those red boxes every patrol, they’re not just blindly following the orders of the crime map. “The officer still has a lot of discretion. It’s not just the algorithm,” Romero says. “The officer still has to know the area well enough to know when to adjust and go back into manual.”Clicking on a few of the boxes for more detail, Romero brings up Google Street View images of the predicted crime areas. Two are centred on the car parks of big box stores, not particularly surprising places for car break-ins and thefts, says Romero. But Brantingham contends that the algorithm is doing much more than just telling cops what they already know. Critics have argued that a larger study of multiple cities would be needed to more accurately test its effectiveness.“Predictive policing is at the cutting edge of policing today. The problem is that, historically, the cutting edge of policing is dull,” says John Eck, a professor of criminology at the University of Cincinnati. He is skeptical about what predictive policing can do to actually prevent crime in the long term. “If crime at locations is highly predictable over long periods, there is often something fundamentally wrong with how the place is managed by its owner that makes it a crime hotspot. And it is the owner who has the responsibility to correct things. We do not have to stop a lot of innocent people and intrude in their lives.“Predictive policing fosters a whack-a-mole policing mentality,” Eck says. “Not that whacking moles doesn’t work – but it is unnecessarily intrusive in people’s lives, which erodes their limited confidence in the police, and undermines something fundamental to our ideals of democracy.”
Widespread data collection efforts have faced scrutiny in recent years, especially since information about the surveillance tactics of the US National Security Agency was leaked by Edward Snowdenlast June. And though much of that data collection focuses on digital communications, a growing amount of information is being gathered in the physical world.Police departments across the US are considering using drones to assist in policing and surveillance. The LAPD has access to more than 1,000 closed-circuit security cameras. Number-plate readers have been installed on police cars in a number of cities, including Los Angeles. The LA County Sheriff’s Department recently tested out an airplane-mounted system that recorded real-time activity in the entire city of Compton. And by this summer, the FBI plans to have a fully operational face recognition system that will eventually contain upwards of 52 million records. According to documents released by the FBI as a result of a lawsuit filed by the Electronic Frontier Foundation (EFF), the database will include not only criminal mugshots but also millions of photos taken for non-criminal reasons such as employment background checks. Law enforcement agencies in San Diego County and in Maricopa County, Arizona, have contracts with private firms to build their own local facial recognition databases, while the New York Police Department has partnered with Microsoft to create a “Domain Awareness System” capable of accessing more than 3,000 surveillance cameras as well as a trove of crime data, 911 calls, number-plate readers and even radiation detectors.

http://www.theguardian.com/cities/2014/jun/25/predicting-crime-lapd-los-angeles-police-data-analysis-algorithm-minority-report
The FBI/NSA facial biometric database is error-prone:
More than 30 privacy and civil-liberties groups are asking the Justice Department to complete a long-promised audit of the FBI’s facial-recognition database.
The groups argue the database, which the FBI says it uses to identify targets, could pose privacy risks to every American citizen because it has not been properly vetted, possesses dubious accuracy benchmarks, and may sweep up images of ordinary people not suspected of wrongdoing.CAN YOU BELIEVE IT? Senate just gave $250 Million To DHS’s Biometric Program!
In a joint letter sent Tuesday to Attorney General Eric Holder, the American Civil Liberties Union, the Electronic Frontier Foundation, and others warn that an FBI facial-recognition program “has undergone a radical transformation” since its last privacy review six years ago. That lack of recent oversight “raises serious privacy and civil-liberty concerns.”

“The capacity of the FBI to collect and retain information, even on innocent Americans, has grown exponentially,” the letter reads. “It is essential for the American public to have a complete picture of all the programs and authorities the FBI uses to track our daily lives, and an understanding of how those programs affect our civil rights and civil liberties.”“One of the risks here, without assessing the privacy considerations, is the prospect of mission creep with the use of biometric identifiers,” said Jeramie Scott, national security counsel with the Electronic Privacy Information Center, another of the letter’s signatories. “it’s been almost two years since the FBI said they were going to do an updated privacy assessment, and nothing has occurred.”File under another lie Big Brother wants us to believe!  Currently, no federal laws limit the use of facial-recognition software, either by the private sector or the government.FBI Director James Comey told Congress the database would not collect and store photos of average civilians and is intended to “find bad guys by matching pictures to mugshots.” But privacy hawks remain concerned that images may be shared among the FBI and other agencies, such as the Defense Department and National Security Agency, and even state motor-vehicle departments.

A 2010 government report made public last year through a Freedom of Information Act request filed by the Electronic Privacy Information Center stated that the agency’s facial-recognition technology could fail up to 20 percent of the time. When used against a searchable repository, that failure rate could be as high as 15 percent.
But even those numbers are misleading, privacy groups contend, because a search can be considered a success if the correct suspect is listed within the top 50 candidates. Such an “overwhelming number” of false matches could lead to “greater racial profiling by law enforcement by shifting the burden of identification onto certain ethnicities.”
Facial-recognition technology has recently endured heightened scrutiny from the anti-government-surveillance crowd for its potential as an invasive means of tracking. Last month, documents supplied by Edward Snowden to The New York Times revealed that the National Security Agency intercepts “millions of images per day” as part of a program officials believe could fundamentally revolutionize the way government spies on intelligence targets across the globe. That daily cache includes about 55,000 “facial-recognition quality images,” which the NSA considers possibly more important to its mission than the surveillance of more traditional communications.

http://www.nationaljournal.com/tech/privacy-groups-sound-the-alarm-over-fbi-s-facial-recognition-technology-20140624Massachusetts SWAT team agency claims it’s a private organization, not subject to public records law:The ACLU of Massachusetts seeks public documents including policies guiding the SWAT team’s use of deadly force, training materials, incident reports, deployment statistics and equipment contracts. The ACLU has asked the Suffolk County Superior Court to declare that NEMLEC’s documents are public records and to order the agency to release them.NEMLEC, a group of 58 police and sheriff departments in Middlesex and Essex counties, receives government grants and taxpayers’ dollars to purchase high-tech equipment, and oversees several operational units. One of these units, the SWAT team, uses armored vehicles, automatic weapons, and combat gear to carry out military-style operations, such as forced entries and high-risk arrests.When the ACLU asked NEMLEC (and the other law enforcement councils in Massachusetts) for records about their SWAT policies and deployments, they were startled to receive this response: WE DON’T HAVE TO GIVE YOU DOCUMENTS BECAUSE WE AREN’T GOVERNMENT AGENCIES!FYI: SWAT teams are funded & run by DHS, click here & here.The ACLU has launched a nationwide campaign to assess police militarization in the United States. ACLU affiliates in 23 states have sent open records requests to hundreds of state and local police agencies requesting information about their SWAT teams, such as how often and for what reasons they’re deployed, what types of weapons they use, how often citizens are injured during SWAT raids, and how they’re funded. Additionally, the affiliates will ask for information about drones, GPS tracking devices, how much military equipment the police agencies have obtained through programs run through the Pentagon and DHS, and how often and for what purpose state National Guards are participating in enforcement of drug laws.“We’ve known for a while now that American neighborhoods are increasingly being policed by cops armed with the weapons and tactics of war,” said Kara Dansky, senior counsel at the ACLU’s Center for Justice, which is coordinating the investigation. “The aim of this investigation is to find out just how pervasive this is, and to what extent federal funding is incentivizing this trend.”Law enforcement councils in Massachusetts & elsewhere are staffed by public police officials, sustained by government grants, and oversee law enforcement operations that involve busting down people’s doors and arresting them. And they want to claim these entities are private, and therefore not subject to open records law?“Private individuals can’t own automatic weapons, or even get product information about armored vehicles,” Rossman said. “NEMLEC operates with all of the privileges of a law enforcement agency, and like a law enforcement agency, it should be accountable to the public” Atty. Jessie Rossman said.DHS has created a militarized police force, click here & here to read more.10 facts you should know about the SWATification of America.That doesn’t fly, and it can’t be right.”NEMLEC can’t have it both ways. Either it is a public entity subject to public records laws, or what it is doing is illegal” Rossman said.“The public deserves to know about law enforcement operations that are taking place in their communities with their money and in their name,” said ACLU of Massachusetts executive director Carol Rose. “If police agencies hide behind a wall of secrecy, the public cannot judge for itself whether officials are acting appropriately or whether policy changes are needed.”http://aclum.org/news_6.24.14aPolice across the country seek to ban social media critics:Although government-aligned media outlets generally are faithful stenographers for the coercive caste, the same is not true of social media. YouTube, Facebook, and Twitter have fatally undermined the official narrative that law enforcement is a noble calling by offering critics the means to document and publicize the criminal violence and pervasive corruption that characterize the profession. Thus it’s not surprising that police are seeking to ban Facebook pages that document police misconduct and demand accountability.“There are anti-anti-police pages starting whose main purpose isn’t to engage the anti-police pages intellectually, but just to report and get them banned,” warns LRC reader Buddhadev Chakraborty. “Examples of these pages are Stop the Cop Haters, and Night of Blue Lights.”Not surprisingly, given that this is the age of Homeland Security Theater, cops and their fellow travelers often seek to provoke comments that can be construed as “threats” or “incitement” – and then demand that Facebook shut the supposedly offensive pages. 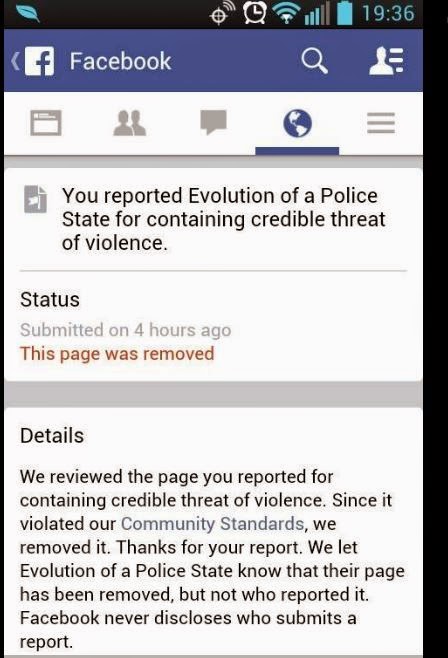 “FACEBOOK IS ON BOARD WITH US!” exulted a cop in a comment to a page entitled “Evolution of a Police State.” Another cop boasted that he had “trolled” Cop Block’s Facebook page and expressed the hope that “more people report them and they too get the Facebook ban hammer.”“Let’s not delay,” urged yet another officer, “we need a new page to destroy.”