Another JP Morgan Investment Banker Jumps To His Death From Headquarters

(George Chen)  An investment banker on Tuesday jumped to his death from the roof of Chater House in Central, where Wall Street bank JP Morgan has its Asia headquarters, several witnesses told the South China Morning Post.

Witnesses said the man initially went to the roof of Chater House, a 30-floor building in the heart of Hong Kong’s central business district – and later jumped. The incident happened between 2pm and 3pm, one witness said.

Several policemen were seen on the roof but apparently failed to convince the man not to jump, one of the witnesses said. Police later confirmed to the Post that a 33-year-old man – surnamed Li – was found in a dangerous position on the roof of Chater House on Connaught Road Central at 2.08pm local time. Li threw himself off the building before the city’s emergency crew arrived.

The man landed on the four-lane western-bound carriageway outside the building. A police spokeswoman said Li was taken to Ruttonjee Hospital, where he was declared dead at 2.31pm. Police are investigating the case.

According to several JP Morgan employees, the man was a junior-level investment banker who played a supporting role on various projects.

A Hong Kong-based JP Morgan spokeswoman said the bank was aware of the incident but it could not confirm at this stage whether the deceased was an employee of the bank. The bank is working with other parties including the police and the property manager of Chater House to follow up on the case, she added.

“There were lots of police, ambulance cars and even some firefighters at the scene, right in front of Chater House,” said one witness, a security guard at Jardine House, an office building opposite Chater House in Central.

“Connaught Road Central was blocked for nearly two hours in the afternoon,” he added. 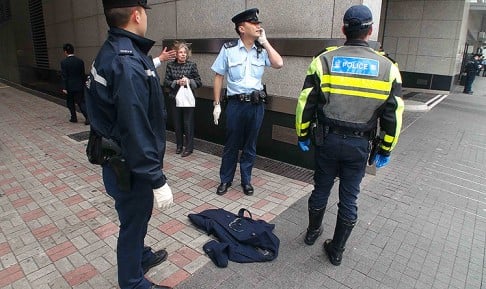 Police warn pedestrians near Chater House in Central. Photo: SCMP PicturesAnother witness working for a financial firm in Jardine House said he and his colleagues were having coffee at a nearby Starbucks when the suicide happened. They heard a heavy sound suddenly from the ground and later realised it was a man who jumped to his death.

“We thought it might have been a car tyre [exploding]. It’s sad to know it is a suicide case,” he said.

The incident apparently had some internal impact on JP Morgan’s business activities in Hong Kong – at least one business meeting was cancelled immediately after the suicide happened.

According to one manager working for a British bank in Hong Kong, his team were originally scheduled for a meeting with JP Morgan at 3pm but it was suddenly cancelled without explanation.

JP Morgan takes up 10 floors, from the 20th to 29th, of Chater House, one of the financial district’s landmark high-rises. It is the main regional head office location for the bank, which also houses its staff in Hong Kong in several other buildings across the city. Chater House also carries the logo of JP Morgan on the top corner of the building.