(Matt Moffett)  Hemmed in by the global financial squeeze and commodities slump, Argentina’s leftist government has seemingly found a novel way to find the money to stay afloat: cracking open the piggybank of the nation’s private pension system.

The government proposed to nationalize the private pensions, which would provide it with much of the cash it needs to meet debt payments and avoid a second default this decade.

The move came as wealthy nations unveiled fresh steps to fight the credit crunch. The U.S. Federal Reserve said it would bolster money-market funds, which have faced withdrawals, by lending as much as $540 billion to the industry. France said it would inject $14 billion into six banks on condition they agree to increase their lending. In a sign banks were a little more willing to lend to each other, the London interbank offered rate, a benchmark for many business and consumer loans, again declined.

Argentine President Cristina Kirchner said the move to take over the private pension system was aimed at protecting investors from losses resulting from global market turmoil. Funds in the system, which is parallel to a government pension system, are administered by financial firms. The private system has about $30 billion in assets and generates about $5 billion in new contributions each year.

While no one knows for sure what the government would do with the private system, economists said nationalization would let the government raid new pension contributions to cover short-term debts due in coming years.

Argentina’s financing needs are growing quickly as the global financial squeeze pushes down prices of its commodity exports, such as soybeans. Coupled with unchecked government spending, the commodity downturn has carved a gap of around $10 billion to $11 billion in what Argentina must pay on its debt between now and the end of 2009, according to economists. The payments are from debt restructured after a 2001 default and new debt issued locally.

The economic turmoil of recent months has exposed budget gaps in many emerging nations. They’ve run smaller budget deficits, but thanks less to spending restraint than to the income bonanza. Now they’re being forced to make tough choices: Mexico this week said it will run a budget deficit next year of 1.8% of annual output rather than a balanced budget as planned.

Argentina is doubly hurt. Having stiffed creditors as recently as 2001, it has few prospects of returning to international lending markets soon. Economists who were critical of the nationalization proposal said it reinforced Argentina’s image as a renegade in financialcircles.

The private pension system was created as an alternative to state pension funds in 1994, when conservative President Carlos Saúl Menem ran Argentina and free-market policies were in vogue in Latin America. Countries in the region followed the example of Chile, which had privatized pensions in 1981. In Argentina, workers have the option of paying into individual retirement accounts run by pension funds rather than the government.

Three million Argentines do so. They can track their accounts and have some say over how the pension funds invest the money, making the system somewhat like U.S. 401(k) accounts. After a nationalization, it’s presumed the government-run system would absorb the private funds.

The Latin American system has helped create a large pool of domestic savings that can fund local capital markets and lend money for projects like toll roads. In Argentina, Mexico and Chile, pension funds are among the biggest players in local stock markets, helping young companies get access to capital.

The main Merval Argentine stock index tumbled 12% on Tuesday, largely on fears that the market would atrophy if the government used new pension contributions to pay debt rather than let it go into the capital markets.

The head of the Argentine association of private pension funds, Sebastian Palla, blasted the government step. He said that since their 1994 inception, the funds have had a 13.9% average annual return.

President Kirchner painted the move as an attempt to help workers weather the financialcrisis. The value of private retirement accounts in Argentina has probably fallen in recent months due to a declining stock market, economists say. President Kirchner said in a speech: “The main member countries of the [Group of Eight] are adopting a policy of protection of the banks and, in our case, we are protecting the workers and retirees.”

Buenos Aires economist Aldo Abram, among many other economists, wasn’t buying that argument. “They were in a tight situation and this was an accessible source of funds,” he said. 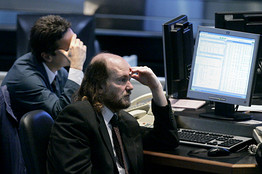 Brokers work at the Buenos Aires Stock Exchange, in Buenos Aires. Argentine stocks fell by more than 11% in reaction to news that the government plans to nationalize private pension funds.

The step requires approval of Congress, where the governing Peronist party has a majority. Opposition leader Elisa Carrió vowed to contest it, saying, “The government measures aren’t designed to better the retirement system but rather to plunder the funds of the retirees.”

Still, the proposal is likely to pass, said Alberto Bernal-Leon, head of macroeconomic strategy at Bulltick Capital Markets in Miami. He noted that Argentina will have elections next year, and said access to pension funds would make it easier for the government to muster support through patronage.

One pension-fund head who is opposed to a takeover suggested that contributors inundate the government with lawsuits. Even if they don’t heed that call, the move is expected to face legal challenges.

In a history replete with financial crises, Argentines have had lots of experience with the government meddling with their money. Prior to the 2001 economic collapse, when the government was trying to maintain the peso at parity to the dollar, the government placed limits on bank withdrawals. Later, it issued a decree converting dollar-denominated deposits to pesos.

Argentina has been largely shut out of international capital markets since 2001, when it declared the largest sovereign-debt default ever.

“With the [latest] announcement, the custom of violating the rules of the game has been repeated, which deepens the lack of confidence,” political analyst Rosendo Fraga wrote in the Buenos Aires daily La Nacion.

The Argentine economy has been buoyed the past five years by rising prices for the agricultural commodities. It also got a hand from Venezuelan President Hugo Chávez, whose government bought billions of dollars of Argentine debt in recent years. But prices of commodities such as soybeans have plunged in recent months, and Mr. Chávez is facing his own problems with the sharply lower price of oil.

Mr. Abram, the economist, said a pension takeover would help the government close about half the gap in funds needed for its debt service, as pension contributions go into public coffers rather than private ones. He said the rest of the funding needs could be obtained from a state-run bank or by dipping into currency reserves.

José Piñera, a former Chilean cabinet minister who pioneered the privatized pension system and has served as a consultant to many other countries that have implemented it, called the nationalization proposal “just another step in Argentina’s 100-year ‘road to underdevelopment.’”