This Bacteria Could Eat Nuclear Waste

(Becky Ferreira)  Humans are very talented at producing hazardous waste, if you hadn’t noticed. But luckily for us, our pals in the bacterial kingdom have been real troopers about helping us dispose of it. Some bacterial strains can purify wastewater, others canturn toxic perchlorate into table salt, and others can straight-up spin poison into gold.

Nuclear waste, however, is one human byproduct that even bacteria won’t touch. But that may soon change, thanks to the discovery of a group of gnarly extremophile species that may actually have the chops to dine on radioactive slops.

Researchers at the University of Manchester happened upon the single-celled extremophiles while studying soil samples from an industrial site in England’s Peak District. While the soil was not radioactive, it was contaminated with dangerously alkaline waste produced by a nearby lime kiln. 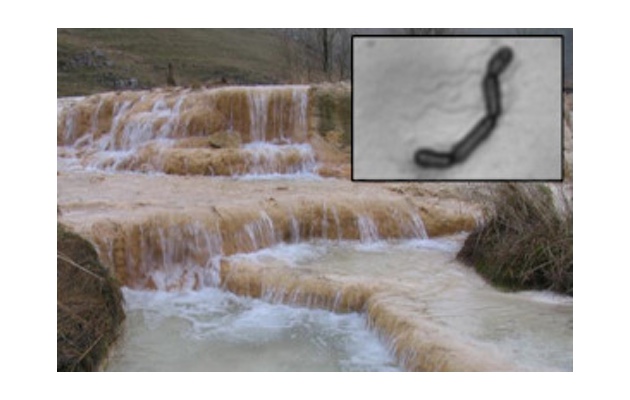 The environment where the new extremophiles were found, with an inset of one individual. Image: Manchester University

The microbes thrived off of the alkaline conditions, and so earned themselves the umbrella term “alkaliphilic microorganisms” in the resulting study, published in The ISME Journal. But the researchers also observed that some species were happy to chow down on isosaccharinic acid (ISA), a very common hazardous substance in nuclear waste containers.

ISA is of particular concern when it comes to the traditional method of storing“intermediate-level” nuclear waste (dumping it into concrete vats and burying it deep underground). Over time, ground water is likely to surround these containers, sparking reactions with the cement that will make the environment more alkaline.

Read The News On Your Time, Sign Up For Our FREE Email Newsletter

Essentially, radioactive material would be hitching a ride out of containment vaults in ISA’s getaway car. If these leaks contaminated water or food systems, the results could be disastrous.

These newly discovered alkaliphilic microorganisms are happy to feed on ISA, however, plus they have already demonstrated that they can survive highly alkaline environments similar to a buried nuclear containment vault.

And those aren’t the only tricks up this group’s collective sleeve. The Manchester team also observed that some species, when deprived of oxygen, simply switched gears and used nitrate or iron to complete their metabolization of ISA. That’s very useful, given that there is not much oxygen to breathe in the disposal vaults.

Much more research needs to be done to feel out the limits of the extremophiles’ abilities, but the team is optimistic about the potential implications.

“We are very interested in these Peak District microorganisms,” Jonathan Lloyd, an environmental professor at Manchester University who worked on the study, said in a statement.

“Given that they must have evolved to thrive at the highly alkaline lime-kiln site in only a few decades, it is highly likely that similar bacteria will behave in the same way and adapt to living off ISA in and around buried cement-based nuclear waste quite quickly,” he continued. “Nuclear waste will remain buried deep underground for many thousands of years so there is plenty of time for the bacteria to become adapted.”