College Protests of Absence of War Led by Professors 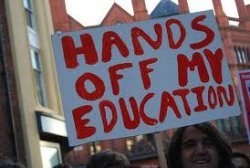 Come gather round people wherever you roam. And admit that the bullshit around you has grown.

Students used to get out of tests and assignments by explaining to sympathetic professors that they had been busy protesting the war on Vietnam. The times they are a changin.

Today college professors lead teach-ins to protest the absence of an all-out U.S. war on Syria. Back then, the public and the government trailed behind the activists. Now the public has grown enlightened, and in a significant but limited way won over the government, blocking the missile strikes, but it’s not just the U.S. President who looks mad enough to spit over the casus belli interruptus. Professors are pissed.

The University of Virginia’s law school has another law school next door belonging to the U.S. Army. The University has built a research “park” next door to the Army’s “Ground Intelligence Center.” State funds are drying up, and the Pentagon’s tap has been left all the way open. This Central Virginian military industrial academic complex is where Washington finally had to turn to find anyone willing to pretend the famous aluminum tubes in Iraq might be for scary, scary nukes. In defense of that record, this week is Iraq War Beautification Week at the University of Virginia’s Miller Center, always a gung-ho proponent of militarism.

Much of this is expected and typical of U.S. academia these days. But the promotions of attacks on Syria have become slicker and more insidious. Here’s an announcement of an event held on Thursday:

This announcement doesn’t advertise a pro-war event aimed at promoting the deaths of large numbers of people. Peace groups sent around this announcement. I sent it around. I attended. And here’s what happened:

Thompson spoke well about World War I and sat silently as her colleagues promoted a new war as barbaric as what she described from a hundred years earlier.

Waldner described the early, non-violent Arab Spring in Syria, breaking into tears, and then sat silently as his colleagues pushed for greater violence, using his stories of early nonviolence to justify it. (Somehow the opposite never happens: we never have to justify nonviolent activism on the grounds that its participants once killed a lot of people.)

The other panelists demanded more weapons for Syrian rebels, more U.S. military involvement, more war, and the violent overthrow of the government.

Students sat there silently. Professors in the audience who say they oppose war sat there silently and told each other afterwards that their complaints about what just happened should remain confidential. It wouldn’t be polite to speak up.

I spoke up at the event. I questioned the panelists’ fantasies about the glory of violence, their willingness to see many more people die in order to overthrow a government that would not thereby be replaced with something better.

Schulhofer-Wohl said that U.S. weapons would overwhelm the government of Syria and its Russian backers. I pointed out that the Russians have more weapons too, but this professor clearly thinks this is another Cold War and that this time Russia will give in easily and cheaply, there will be no blowback, and the pawns in the game will all benefit.

Or, rather, the evil of one side of the war justifies the other side, and the consequences be damned.

We can laugh at academia marginalizing itself. We can celebrate the greater wisdom of the masses. But these professors, speaking in a building where a former CIA “historian” now works, are having their way. The CIA is arming the war in Syria and escalating it, against the will of the U.S. public. Students are being subtly indoctrinated with acceptance of war and with contempt for democracy at one stroke.

UVA founder Thomas Jefferson would be outraged, unless someone told the old slavery profiteer how much money wars make for a certain little group of special people. Then he’d understand perfectly. When UVA’s Dean of Arts and Sciences was promoting war on Libya, she held up Jefferson’s own war on Libya as a model.

This is our heritage, boys and girls. And its days are numbered. People are not going to stand for it much longer. Academia is going to have to accept it that soon they’ll be drenched to the bone.

Some of those silent sitting students have brains in their heads. Their professors forget that sometimes.