(Activist Post)  Matt Drudge, the founder of the enormously popular conservative news aggregator DrudgeReport.com, tweeted today that since there are no real differences between Democrats and Republicans the only two real political parties are Authoritarians and Libertarians.

“It’s now Authoritarian vs Libertarian,” Drudge tweeted. “Since Democrats vs. Republicans has been obliterated, no real difference between parties…”

Drudge also asks his followers why anyone would still vote Republican. “Who are they?!” he asks. “Raised taxes; marching us off to war again; approves more NSA snooping.”

Is this a turning point for conservative politics? Is the Liberty Movement of peace and privacy set to be catapulted into the mainstream? 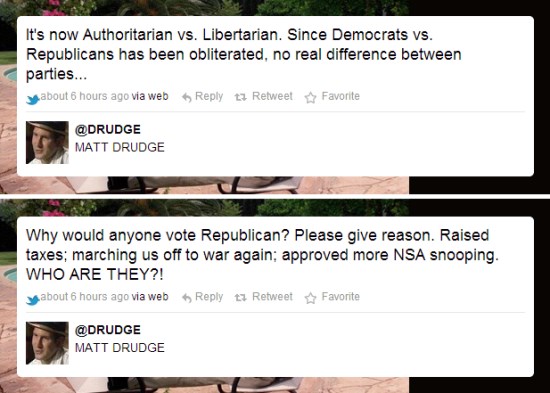