The Washington Spectator published columnist Rick Perlstein’s piece “The Story of the Other Racist Flag” on Monday. It was later republished by Newsweek.

“You know that racist flag?” Perlstein writes. “The one that supposedly honors history but actually spreads a pernicious myth? And is useful only to venal right-wing politicians who wish to exploit hatred by calling it heritage? It’s past time to pull it down.”

Perlstein is alluding to the Confederate flag, which was removed from the South Carolina Capitol grounds in July. But really, he’s referring to the POW/MIA flag, which he argues was created by Richard Nixon to “smother the complexity, the reality” of American war crimes in Vietnam.

These excerpts from the piece outline his argument:

“Richard Nixon invented the cult of the ‘POW/MIA’ in order to justify the carnage in Vietnam in a way that rendered the United States as its sole victim.“Downed pilots whose bodies were not recovered…had once been classified ‘Killed in Action/Body Unrecovered.’ During the Nixon years, the Pentagon moved them into a newly invented ‘Missing in Action’ column. That proved convenient, for, after years of playing down the existence of American prisoners in Vietnam, in 1969, the new president suddenly decided to play them up.

“He declared their treatment, and the enemy’s refusal to provide a list of their names, violations of the Geneva Conventions—the better to paint the North Vietnamese as uniquely cruel and inhumane. He also demanded the release of American prisoners as a precondition to ending the war.”

He adds that “these prisoners only existed because of America’s antecedent violations of the Geneva Conventions in bombing civilians in an undeclared war.”

Mediaite notes that the column comes up short in specifically explaining why the flag itself is racist or represents racism, though he does call for its removal.

There has been huge backlash against Newsweek and Perlstein online. 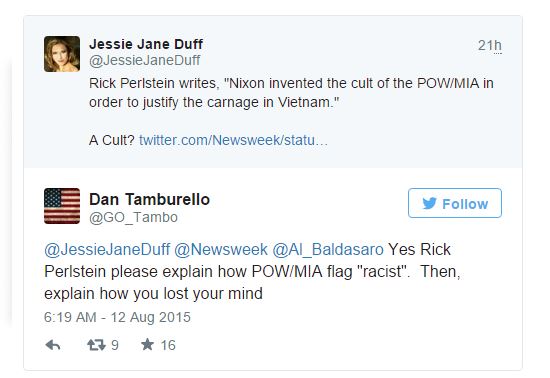 On Facebook, one user referred to it as “revisionist history” while others called it an attack on veterans.

“Wow, may as well go back to calling our boys who served in Veitnam baby killers!” wrote Carla Hunter. “I know guys who were POW’s and I know families that FINALLY got their loved one’s remains back after them being MIA for 25 years. This attack on veterans, those who came home, and those who didn’t, is abhorent.

Perlstein isn’t without his supporters though.

In the comments on the piece, one user wrote, “It’s time we begin realizing that ‘Non-American lives matter too.’ This black flag is a symbol of our refusal to acknowledge the harm caused ON OUR BEHALF by OUR soldiers to the Vietnamese. The sooner it’s taken down, the better.”

What do you think of Perlstein’s opinion? Leave a comment below.