(Chris Mandle)  Tyler, the Creator has explained why he had to cancel four dates in the UK and Ireland recently, saying that he has been refused entry in the UK for the next 3-5 years due to his offensive lyrics.

The rapper, real name Tyler Gregory Okonma, said on Twitter that he has been not allowed to enter the country because of offensive lyrics from 2009, despite him being in the UK eight weeks ago.

His manager, Christian Clancy, said in a statement that the secretary of state claimed Okonma’s lyrical content in his recordsB*****d and Goblin “encourages violence and intolerance of homosexuality” and “fosters hatred with views that seek to provoke others to terrorist acts”.

Okonma’s work as a solo artist and a member of rap collective Odd Future Wolf Gang (Kill Them All) has heavily featured anti-gay rhetorics and lyrics about rape. But he has defended his use of the word ‘faggot’ on several occasions, claiming he doesn’t use it to cause offense to the LGBT community.

When the rapper won best New Artist at the 2011 MTV Music Video Awards, LGBT organisation GLAAD wrote a post condemning MTV for supporting the artist, commenting that he “writes some of the most violently anti-gay and misogynistic music currently enjoying mainstream recognition”. 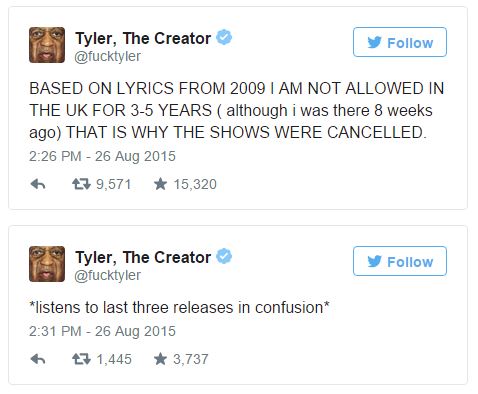 Okonma cancelled his tour dates last week, including shows at Reading, Leeds and Belfast, but did not initially explain why. 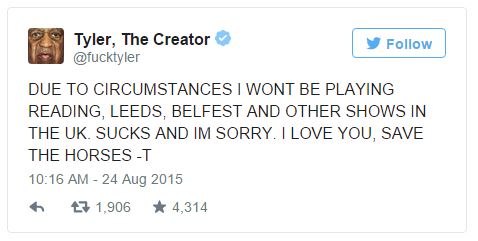 The UK Home Office has provided more details on the visa denial, claiming the rapper’s presence is “not conductive to the public good”.

“Coming to the UK is a privilege, and we expect those who come here to respect our shared values,” it says in a statementobtained by The Quietus.

“The Home Secretary has the power to exclude an individual if she considers that his or her presence in the UK is not conducive to the public good or their exclusion is justified on public policy grounds.”

Clancy said his client doesn’t write offensive lyrics any more. “This is a broader issue of free speech, with new lines being drawn that include reaching back in time without acknowledging growth,” he said in a post on Tumblr.But he was vocal in supporting former Odd Future bandmate Frank Ocean when he opened up about his sexuality in 2012, and has since launched an anti-homophobia clothing line.