Record shattering 94 Million Americans not in the labor force

(MB 360)  The employment numbers released a few days ago left much to be desired right before entering into the nationally celebrated Labor Day holiday.

This category added a stunning261,000 people while overall jobs added came in at a lackluster 173k.  When we dig into the employment figures we find that many of the jobs being added are also coming in the form of low wage jobs.  The market is coming to the grim realization that something is fishy with how the employment figures are reported.

We supposedly have the lowest unemployment rate in seven years yet somehow we now have 94 million Americans not in the labor force with hundreds of thousands of people dropping out each month.  Those finding work are largely in McJobs with low pay, no benefits, and job security that resembles the lifespan of a fly.  The army of non-working Americans continues to grow.

Those not in the labor force

The unemployment rate is a tricky number since it is derived by the total pool of potentially available workers.  So if you continue shrinking the pool, the unemployment rate continues to look better despite the reality that many are dropping out because they are unable to find work or are going into massive debt with going to college.  We aren’t counting kids or those unable to work.  This is coming from larger structural changes.

Just look at the trend here: 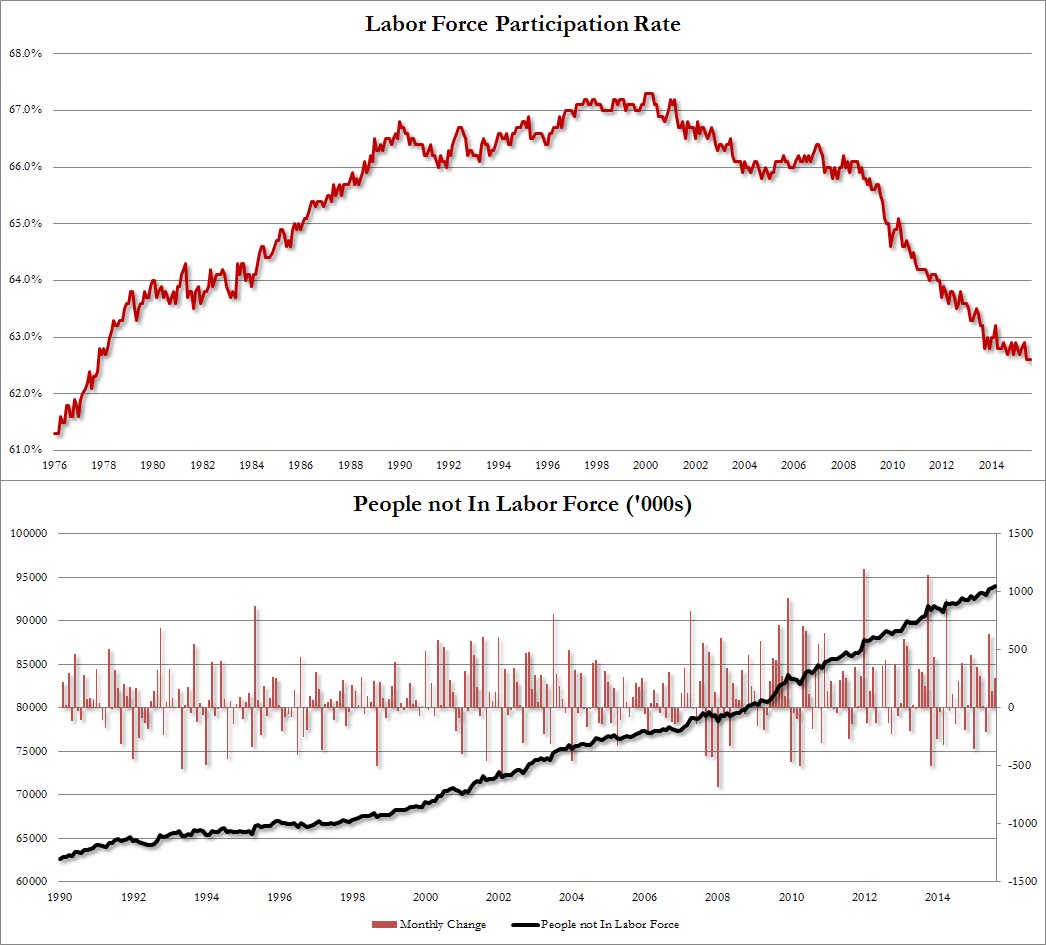 These are insane figures.  Let us break it down for you:

Not in the labor force

Over this period only 4 million new jobs have been created:

Is it any surprise the unemployment rate is at a seven year low even though we just expanded those not in the labor force by 14.9 million?  Then we have many older Americans becoming fully dependent on Social Security as their primary source of income and relying on a smaller employment base for support.  These are issues that will continue to put a strain on the system short of the market adding millions of new jobs.  That would be the rosy scenario.  So far, that has yet to materialize.

I think the big difference we have seen over the last decade or so is the proliferation of alternative sources of media.  If it were not for the internet, people would be echoing the shallow drivel that comes out of the mainstream press.  When in the past has the “not in the labor force” category ever been covered?  Never.  The media has become a shell of its former self and has lost a sizeable portion of its power.

We have a major crisis unfolding.  We have millions of Americans saddled with $1.36 trillion in student debt.  We have a large number of current workers employed by low wage jobs that seem to be the top employment fields.  On this Labor Day, it matters that we actually count those that are in the labor force and those that are not.  Numbers do matter and when you have 94 million Americans not in the labor force, we have to dig deeper.