Stunning Photos Of U.S. Service Members Publicly Saying No To War With Syria


(Michael Snyder)  What do members of the U.S. military think about the possibility of a war with Syria?

So far, they appear to be overwhelmingly against it just like the rest of the general public.  In fact, a new Twitter hashtag (#IdidntJoin) has been flooded with messages from service members expressing their displeasure with the idea of being forced to fight for al-Qaeda in Syria.

This is consistent with what we have been hearing from other sources as well.  For example, U.S. Representative Justin Amash recently sent out a tweet with the following message: “I’ve been hearing a lot from members of our Armed Forces. The message I consistently hear: Please vote no on military action against#Syria.”

Of course there are probably a few members of the military that would love a war with Syria, but they appear to be very much in the minority.  Hopefully the Obama administration and members of the U.S. Congress are listening.

Posted below are photos taken from Twitter of American service members publicly declaring that they do not want war with Syria.  In these photos they are wearing their uniforms, but they are obscuring their faces because they could potentially get in a lot of trouble for publicly defying the Obama administration. 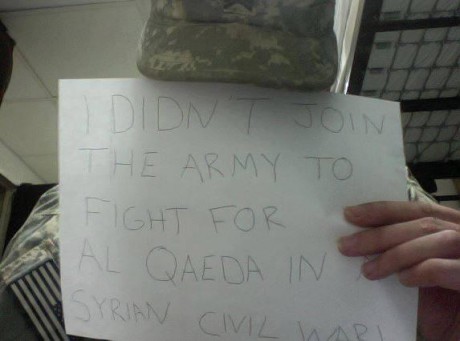 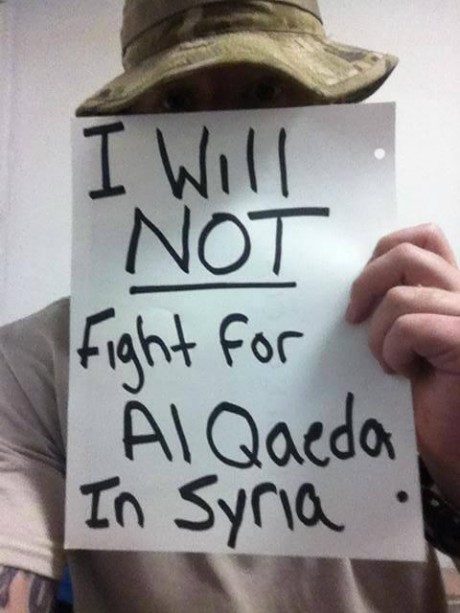 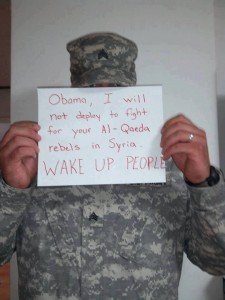 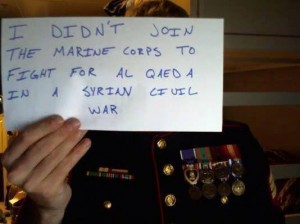 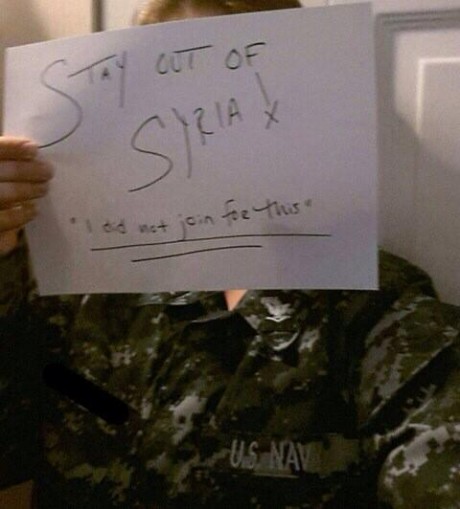 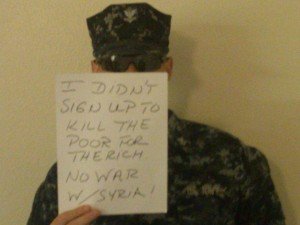 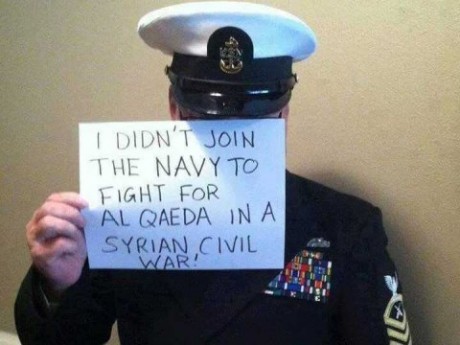 “I’m a U.S. Air Force vet who spent a solid 6 years shuttling between Afghanistan and Iraq, doing everything from combat airdrops to medevacs to hauling flag-draped coffins,” wrote one servicemember in an email, who also mentioned travel to 38 countries in that time. “What we do not need is another war, and we certainly do not need any further involvement in a civil war where our objective isn’t clear, and our allies aren’t really our allies.”

And it is not just the rank and file that are against war with Syria.  According tothe Washington Post, many among the top military brass are expressing “serious reservations” about taking action in Syria…

The Obama administration’s plan to launch a military strike against Syria is being received with serious reservations by many in the U.S. military, which is coping with the scars of two lengthy wars and a rapidly contracting budget, according to current and former officers.

Having assumed for months that the United States was unlikely to intervene militarily in Syria, the Defense Department has been thrust onto a war footing that has made many in the armed services uneasy, according to interviews with more than a dozen military officers ranging from captains to a four-star general.

This is not about being “anti-war”.  This is about not wanting to shed American blood in an Islamic civil war where neither side is our friend.

Anyone that believes that the Syrian rebels are the “good guys” is beingabsolutely delusional.

In fact, even the U.S. State Department has admitted that the al-Nusra Front is a terror organization that is affiliated with al-Qaeda.  According to the State Department, they have been responsible for close to 600 terror attacks since November 2011…

The bolded language in this travel warning–emphasizing that the al Qaeda affiliate fighting in the Syrian opposition has been targeting places such as “shopping areas” was put there by the State Department in the online posting of its warning.

In a statement published May 16, the State Department said that Muhammad al-Jawlani, the leader of the al-Nusrah Front, had recently “pledged allegiance to Ayman al-Zawahiri, al-Qa’ida’s leader.”

In an audio recording on Thursday, Al Qaeda’s leader Ayman al-Zawahri announced his support for the beleaguered Syrian rebels.

He framed the Syrian revolution, and the fall of President Bashar al-Assad, as necessary steps towards the defeat of Israel.

“Supporting jihad in Syria to establish a Muslim state is a basic step towards Jerusalem,” he said.

So why would members of the U.S. military want to go put their lives on the line to help al-Qaeda take over Syria?

Service members would have to be insane to want to go into battle allied with al-Qaeda.

Not a single drop of precious American blood should ever be shed for al-Qaeda.  Unfortunately, the Obama administration seems absolutely determined to make this war happen, and so very soon members of the U.S. military will be forced against their will to fight for the benefit of al-Qaeda in Syria.