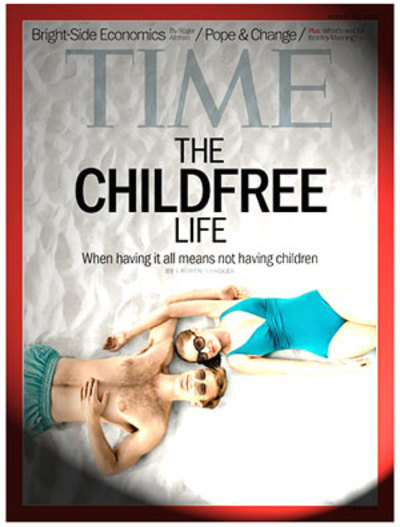 (Truthstream Media)  Is less more, or is more less? Time’s upcoming August 12, 2013 issue depicts a smiling couple lying together on a sandy white beach under the headline “The Childfree Life: When Having It All Means Not Having Children.”

The article begins with a story about a woman who decided she never wanted to have children, and further, never regretted that decision, followed by a weighty discussion of how our nation’s birthrate is currently the lowest it has ever been in its history:

“From 2007 to 2011, the most recent year for which there’s data, the fertility rate declined 9%. A 2010 Pew Research report showed that childlessness has risen across all racial and ethnic groups, adding up to about 1 in 5 American women who end their childbearing years maternity-free, compared with 1 in 10 in the 1970s.”

This ‘Childfree Life’s’ main agenda, as if you couldn’t guess it from the cover, only gets more obvious from there. It discusses the expense of having a child, noting that:

Also stressed is that, while life can be lonely for people who have ‘disappeared into parenthood’, other women and childless couples are frustrated and resent living in a society where they feel they are forced to have to ‘trade their freedom’ or independence to be parents, grieve their childless lifestyle if they lost it to having a child, and that motherhood has been rendered socially unrealistic with how much it is expected that mothers invest in their children these days.

The propaganda is clear. Prospective couples should think twice about the burden and cost of raising a child in modern society, and turn instead to the supposed indulgence and freedom of never conceiving.

It normalizes a lifestyle without raising children – against all biological programming – and indulges in its supposed advantages to sell the idea to a susceptible public that they should give into ‘modern’ attitudes avoiding procreation and pursue personal fulfillment. Meanwhile this message acclimates and provides an explanation for a coming demographic winter, as birth rates have fallen drastically in the Western world, and significantly as well in the developing world where depopulation pressure has been greatest.

Meanwhile most Western nations are now facing a “baby bust,” with population growth falling well below the replacement rate. The global fertility rate has fallen to 2.42 births in 2011 numbers (with 2.1 needed for statistical replacement, or, an equilibrium of human births). The United States, like other Western nations, has already fallen below replacement rate, with a population growth rate of 0.9% and falling, insufficient for continuity, which in turn affects the possibilities for economic growth.

According to CNN, the economic collapse has also triggered a further decline in the birthrate, with immigrants leading the way and having 23% fewer births in 2011 than 2007.

A world with fewer babies has swiftly arrived in statistical terms, and slowly creeped in around public perception, and the media want to make sure you are comfortable with this reality.

Back in March 2012, TIME ran this telling story:

Population Studies: Birthrates Are Declining. For the Earth — and a Lot of People — That’s Not a Bad Thing

As the dystopic film Children of Men portrays, a drastic drop in fertility is a recipe for social upheaval – recognizable as a hopeless police state – and economic disaster all the more so in cultures where younger generations are designed as a built in safety net for the care of the elders, including China, Japan, India and other Asian and Pacific nations, often where globalist family planning operations have been most deeply focused. The shortage of women combined with the economic burden of fewer children taking on responsibilities for elders has created a real life ticking time bomb for social strain or outright disorder.

TIME chastised an author decrying parents who avoid having children, noting in its article that, “The Weekly Standard‘s Jonathan V. Last has made the case in his controversial book What to Expect When No One’s Expecting that the selfishness of the childless American endangers our economic future by reducing the number of consumers and taxpayers.”

In the Western world, it has been represented by a withered and contracted society, with wealth and power concentrated in the hands of the Anglo establishment, in turn partnered with global allies and controlling central banks. A shift in technology has evaporated the need for a large manufacturing labor force or a well educated populace, bolstered by a middle class pegged living standard with room for all.

Instead, trends have instructed young adults, particularly those in metropolitan areas, to regard parenthood as a nearly repulsive and reluctant state to be avoided if possible, or put off until an era when socialization and personal adventures have peaked. Once, we overheard girls at a party one-upping one another about the number of abortions they’d had, citing concern about overpopulation as a major motivation, while a male partygoers shrugged off having kids and proclaimed that he’d never have more than one child – ever.

Emphasizing the expense of raising children plays to the current climate of economic downturn and the subtle propaganda to exercise austerity in one’s biological footprint over the earth, including keeping in check one’s family line in proportion with its means.

While the birth rate has plummeted sharply, the population numbers continue to grow, giving a distorted view of overpopulation, deliberately stoked in the media (and often directed towards environmental imperatives), to the public mind. Because of drastically lower birthrates however, the wave of human numbers will sharply recede after cresting at an estimated 12 billion, though it takes several generations to see a reflection in the total global numbers.

While the MIT population models have been used by the Club of Rome to convince the world that their over-consumption will depopulate the planet and deplete the resources of the earth, their expectations may well be met. However, it seems clear that the shrinking fertility rate has built in a population contraction, while the social net has been inverted sharply enough to potentially contribute to socio-political unrest.

The neo-Malthusian Club of Rome has once again surfaced– at a time when environmentalists are demanding world government to save the earth– to present computer models it developed with MIT. It predicts a stark future where limited resources like oil, food and water supposedly trigger a crash that ends with a precipitous reduction in the human population. The graph, while failing to provide actual numbers on the Y axis, appears to show a world population level in 2100 approximately equal to the almost 4.5 billion people in 1980, a decline of more than 5 billion from projected peak numbers (which could be even higher).

A far cry from the Population Bomb predicted by population alarmists of the 1960s and 1970s, it predicts a fallout of population numbers and societal stability en masse. While humans are encouraged to visualize their footprint as another human being trampling on the planet nearly tipping past its ‘carrying capacity’, their sudden disappearance as a member of society could prove far more disruptive.

Lyndon LaRouche’s Executive Intelligence Review, along with other critics, found in the early 1980s that the MIT-created computer model had been tailored to produce the results Club of Rome founder Aurelio Peccei wanted to show. As authors Phillip Darrell Collins and Paul David Collins summarize:

“The motive for this deception, Peccei contends, is purely an altruistic one. Apparently, the “nobel lie” provided necessary shock treatment” to compel nations to adopt measures of population control (Executive Intelligence Review Special Report, p. 16, 1982). In a critique of The Limits to Growth, Christopher Freeman characterized the MIT group as a collective “Malthus with a computer” (Freeman p. 5, 1975).

The Club of Rome laid bare the motivitation to use environmental and population issues as the pretext for greater control over society in their 1991 publication The First Global Revolution(coinciding with the 1992 United Nation’s Earth Summit that established Agenda 21) that:

“The common enemy of humanity is man. In searching for a new enemy to unite us, we came up with the idea that pollution, the threat of global warming, water shortages, famine and the like would fit the bill. All these dangers are caused by human intervention, and it is only through changed attitudes and behavior that they can be overcome. The real enemy then, is humanity itself.”

In Case You Missed