Why Are So Many Of The World’s Oldest Businesses In Japan?

(Zachary Crockett)  In Silicon Valley, any company that survives for more than a decade is considered a wise old grandfather. This is indicative of a larger trend: in the modern business world, longevity is increasingly rare.

Historically, the average lifespan of a multinational corporation has been between 40 and 50 years — a figure that has, converse to the human lifespan, gradually been on the decline. A recent study that analyzed thousands of European firms yielded a corporate life expectancy figure of a mere 12.5 years. This seems to be at least partially corroborated by the fact that more than one-third of the corporations on the 1970 Fortune 500 list were no longer in existence by 1983. 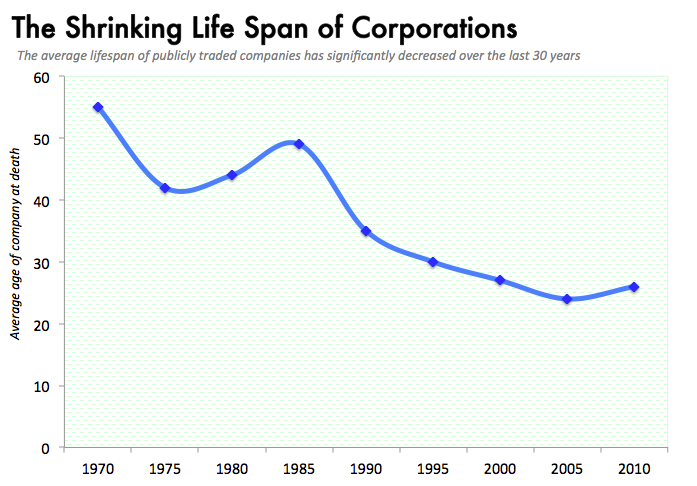 Data via Boston Consulting Group; based on the entry, growth, and exit dates of 35,000 publicly listed companies (using data from Compustat and the S&P Capital IQ database)

Companies are dying younger, but are also more prone to collapse at any given time. According to a Boston Consulting Group report, “one-tenth of all public companies fail each year, a fourfold increase since 1965.”

There are, however, exceptions to these dismal statistics: world-wide, there are 967 businesses founded prior to the year 1700 (and dating as far back as 578) that are still in operation today.

Astonishingly, 517 of them, or 53%, are located in one country: Japan. The next closest country, Germany, houses a mere 19% of the world’s oldest businesses, most of which are breweries. After that, no other country boasts more than 5%.

Japan contains eight of the world’s ten longest-running businesses (all founded prior to the year 800), including the world’s oldest hotel, Nisiyama Onsen Keiunkan, a hot spring that has been in continuous operation since 705. The country also houses the world’s oldest sake brewer (Sudo Honke, 1141), religious goods company (Tanaka Iga, 885),  confectionary (Ichimojiya Wasuke, 1000), and, until recently, construction company (Kongo Gumi, 578) — all of which have been verified by the Guinness Book of World Records.

So, what is it about Japan, in particular, that has allowed businesses to survive for so long? 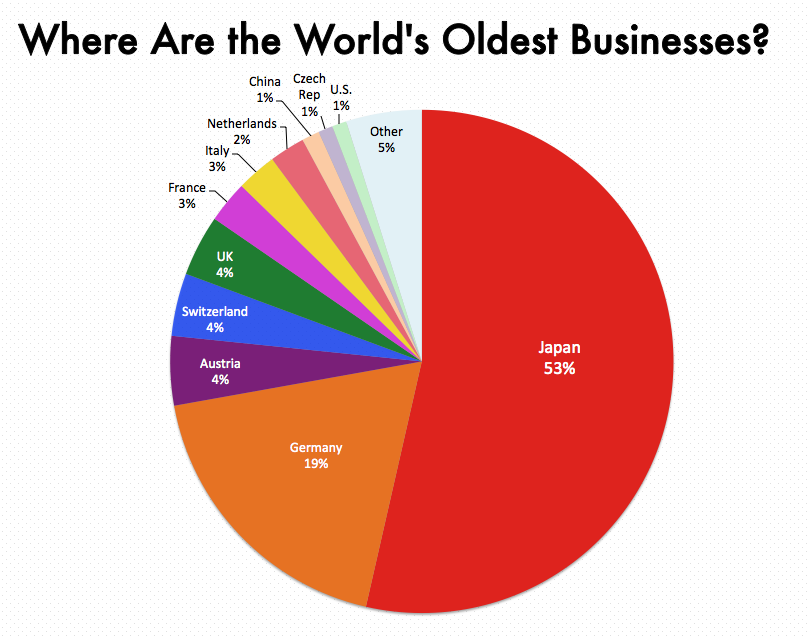 Japan, as Slate notes, is an “old country with an old economy:” the majority of the its longest surviving businesses were created along trade routes from Tokyo to Kyoto and thrived with the introduction of the semi-elite urban class in later years.

Most of Japan’s oldest companies also boast of being “family run” for dozens of generations. But for some of these companies, the reality of this claim is far from the truth: in cases where there is no son to inherit a business, or where a Japanese CEO “desires a better quality son than nature provided,” an heir is legally adopted. For centuries, Japanese business owners have engaged in this practice.

Japanese adult adoption dates back to the Tokugawa era (1603-1867), when merchants sought free labor for field work. Initially considered to be demeaning and emasculating, being adopted as an adult became “more intertwined with family firms and capitalism” in the 20th century, and took on a connotation of prestige and opportunism.

Today, 98% of Japan’s 81,000 adoptees are males between the ages of 25 and 30 — many of whom are businessmen who are legally adopted by the owners of corporations and put in management positions. This way, the “family owned and operated” claim technically remains intact, without the risk of passing on a legacy to a less-than-capable son or nephew. Through a technique called “Mukoyōshi,” a business owner with no male heirs to his company can also legally adopt his daughter’s husband as a “second-birth son.” Even in the rare case that a thoroughly vetted male adoptee fails in his leadership role, he can be disinherited, and another heir can be adopted to take his place. 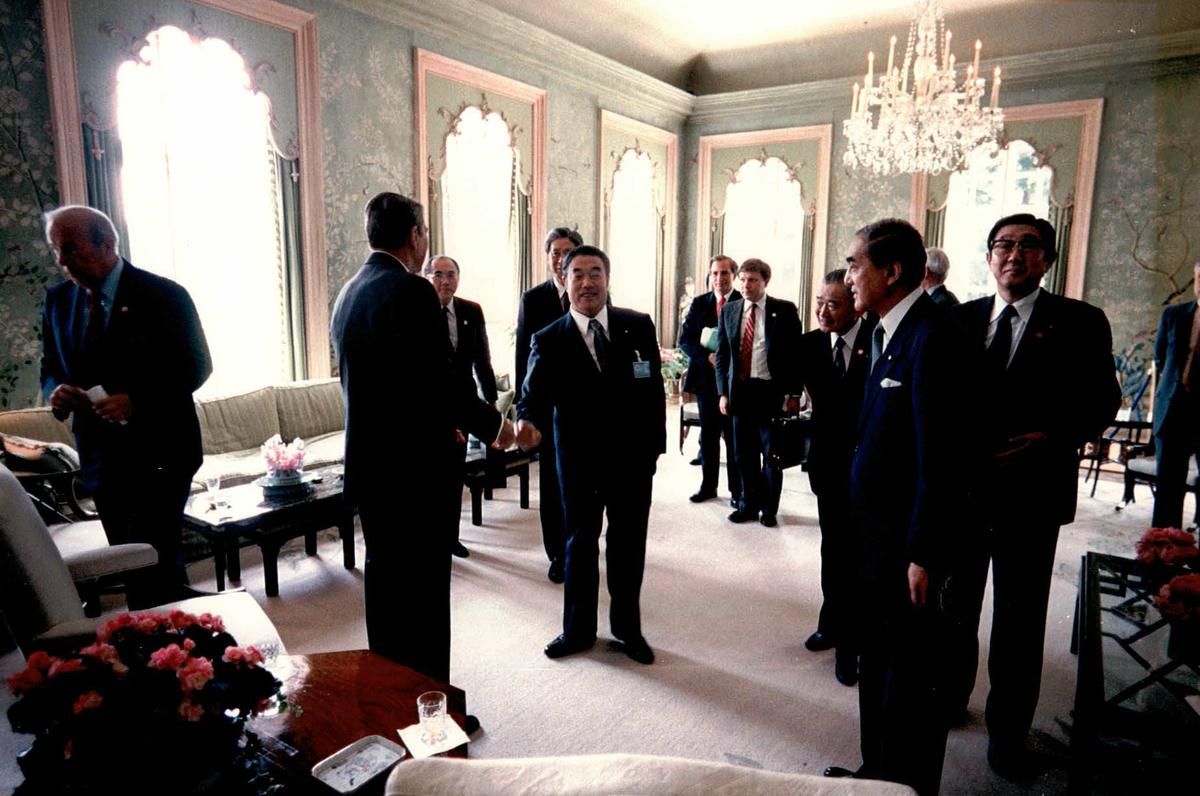 Many of Japan’s most prized companies have stayed afloat by engaging in this practice.Freakonomics enumerates on one example — that of auto manufacturer, Suzuki:

“Suzuki’s current chairman and CEO, 81 year-old Osamu Suzuki, is an adopted son — the fourth one in fact — to run the company. When it came time, Osamu Suzuki chose his son-in-law, Hirotaka Ono, as his heir, rather than his biological son. Ono married Suzuki’s eldest daughter, just as Suzuki had done a generation prior. But in December 2007, Ono died of pancreatic cancer, forcing Osamu to return as chairman and CEO. As of April 2011, Osamu had created a four person board to help run the company, led by his own biological son, Toshihiro Suzuki. Toshihiro might well become the first blood-related Suzuki scion in four generations, but it’s far from certain, and of course, he will always be the second choice of his father.”

Vikas Mehrotra, a researcher who has traced business-motivated adult adoptions in Japan, surmises that this practice has “rendered Japanese family firms more professionally managed than their peers elsewhere.”

“If you compare the performance under different kinds of heirs, blood heirs versus adopted heirs,” he writes, “the superior performance of second-generation managed firms is entirely attributable to the adopted heir firms.” 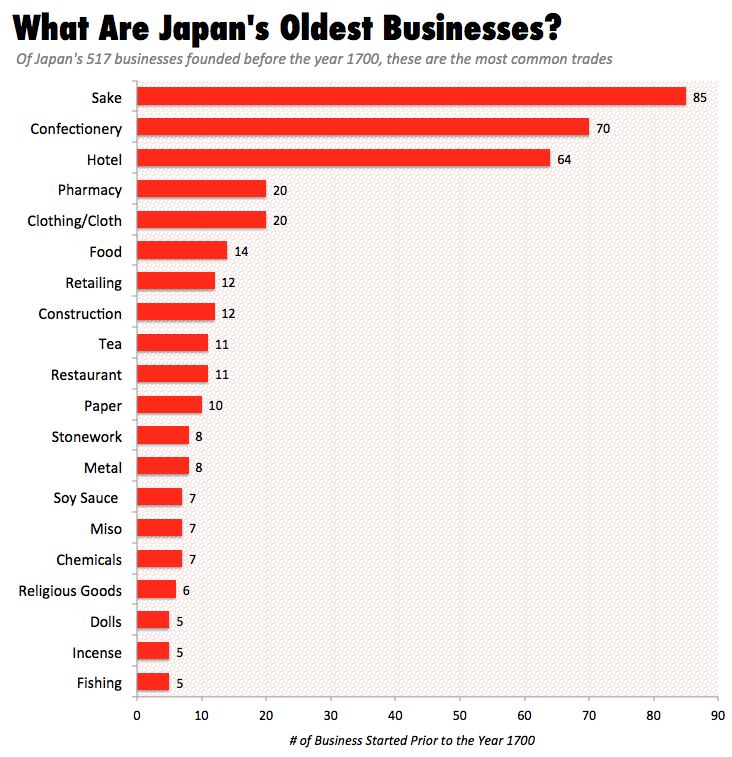 While adult adoptions explain how these firms have been able to survive within the “family” for so many years, they don’t necessarily serve as a sole justification for the long lifespans of Japanese businesses. Likely, this is a result of many factors.

One could also argue that Japan’s isolationism — specifically in the years between 1641 to 1853 — assisted in preserving the legacy of local businesses. During this period, Japan’s economy thrived, and the country enjoyed one of the longest stretches of peace in any nation’s history.  The Japanese also enjoy the longest human lifespan of any population on Earth, as well as the third lowest infant mortality rate, both of which contribute to economic stability.

In his book, The Living Company, Dutch business theorist Arie De Geus analyzed 30 centuries-old businesses for common traits (including several in Japan), and deduced their success to four commonalities:

1. Long-lived companies were sensitive to their environment [and] remained in harmony with the world around them.

2. Long-lived companies were cohesive, with a strong sense of identity. No matter how widely diversified they were, their employees (and even their suppliers, at times) felt they were all part of one entity.

3. Long-lived companies were tolerant [and] generally avoided exercising any centralized control over attempts to diversify the company.

4. Long-lived companies were conservative in financing. They were frugal and did not risk their capital gratuitously.

Ultimately, he whittled down his theory to one sentence: “Companies die because their managers focus on the economic activity of producing goods and services, and they forget that their organizations’ true nature is that of a community of humans.”

Japan has seemed to especially master this — especially through the nurturement preservation of industries of great cultural importance. Many of the country’s 517 businesses founded prior to the year 1700 are culture-oriented: Taiko drums, paper lanterns, dolls, brushes, and the like. A continuous endorsement of tradition has simply not permitted them to die out. 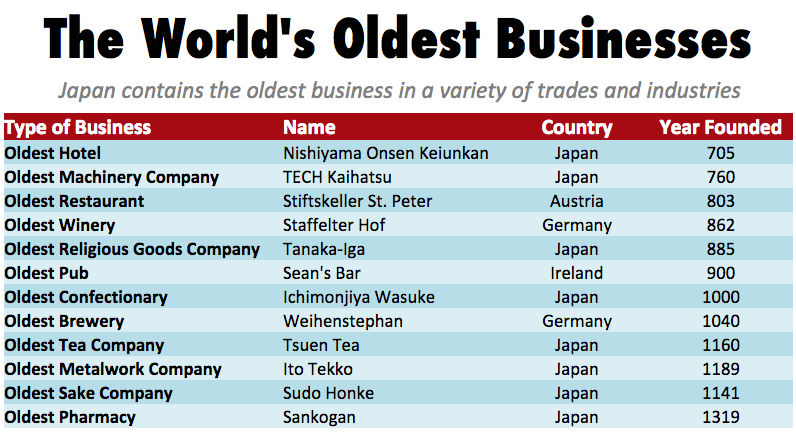 Still, as Mehrotra and other researchers endorse,  it is unlikely that many of Japan’s oldest corporations would be around today if not for adult adoptions. In a country where the “family-owned” company title is of paramount importance, adoptions have provided business owners with a rather pleasant work-around.

Perhaps the greatest example of this is the backstory of Hoshi, a Japanese inn founded in Komatsu in 718. As the company’s story goes, in the year 717, a Buddhist monk named Taicho Daishi was visited in a dream by the god of Mount Haku, and told to open a hot spring. His pupil, Garyo Hoshi, founded Hoshi on a simple principle: “Take care of fire, learn from water, co-operate with nature.” Since then, Hoshi has been passed down through the hands of 46 generations of his sons.

The reality is much less glorifying: most of Hoshi’s “sons” were adopted businessmen who had the know-how to operate and sustain a successful business. Despite this, the company has gained entry into the Henokiens, an elite social club that only accepts businesses that have operated for 200 years under 100% familial control. It’s is the club’s oldest member by nearly 1,000 years.

Yet, irregardless of the means, something must be said for Hoshi, and the rest of Japan’s centuries-old businesses: in an era where it’s hard enough to keep a company running for a decade, they have survived the formidable test of time.